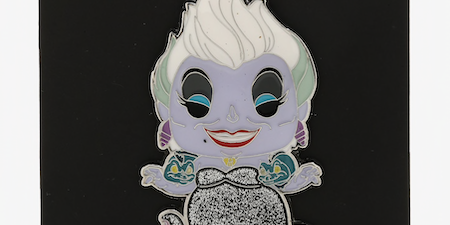 Here is a look the new Funko Pop! Disney The Little Mermaid Ursula with Flotsam & Jetson enamel pin at BoxLunch! The retail price is $9.90. Released in August 2019 and is part of the Funko Pop BoxLunch Collection.

Ursula isn’t complete without Flotsam and Jetsam. The sea witch and her little poopsies from Disney’s The Little Mermaid are all featured on this silver tone Pop! pin! Ursula’s even more glam than usual with the glitter details on her dress and tentacles.