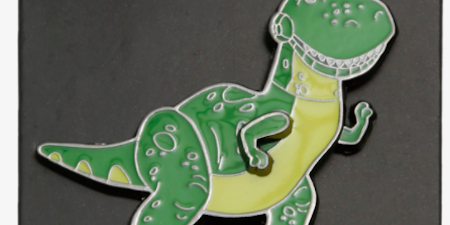 Here is a look at the new Disney Pixar’s Toy Story Rex Moving Arms pin at BoxLunch! Released in August 2020 and the retail price is $8.90.

Rex is going for fearsome here, but we just don’t feel it! The lovable dinosaur toy from Disney•Pixar’s Toy Story looks anything but scary in the form of this Loungefly pin. And his tiny arms actually move—we’re going in for a hug!

The King and Queen of Hearts Circle Frame Disney Pin at BoxLunch
January 18, 2022