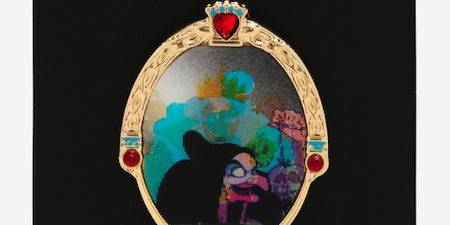 Here is a look at the new Disney Snow White and the Seven Dwarfs Evil Queen enamel pin at BoxLunch! The retail price is $9.90. Released in September 2019.

This is no ordinary pin, it’s a magic wishing pin! This gold tone Magic Mirror-shaped enamel pin by Loungefly features a lenticular image of the Evil Queen from Disney’s Snow White and the Seven Dwarfs, holding her tempting poisoned apple. She appears both as a queen and a disguised old lady, depending on which angle you look at it.

The Child with Frogs Star Wars Pin at BoxLunch
October 13, 2021