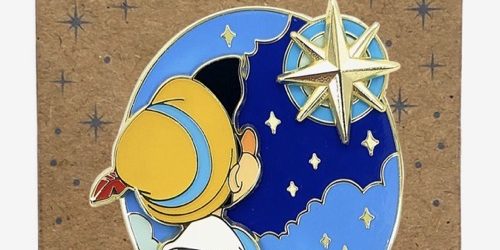 Here is a look at the new Disney Pinocchio Wish pin at BoxLunch! You may recall the recent Pocahontas and Ariel recycled metal pins at BoxLunch as well! Released in December 2020 and is exclusive to BoxLunch. The retail price is $12.90 and features a pin-on-pin design.

Wish upon this pin, and anything you heart desires will come to you! Pinocchio and Jiminy Cricket gaze at a star on this gold-tone pin, layered over a sky-themed circle to give it a 3D effect!