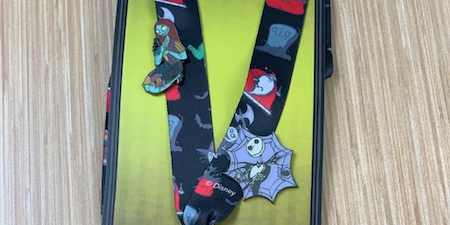 A new The Nightmare Before Christmas lanyard pin set was just spotted at BoxLunch! Released in August 2019 and is currently only available in store at select BoxLunch locations. Retail price is $16.90.

It features two pins on a NBC themed lanyard. The characters include Sally and Jack Skellington. It also features an Oogie Boogie lanyard charm at the bottom.