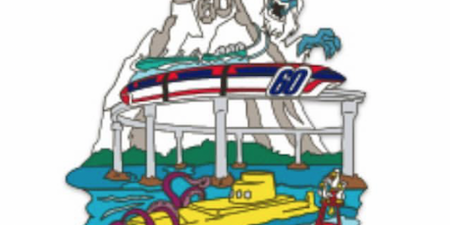 Here is a look at a few anniversary pin releases at Mickey’s of Glendale! Available only to Disney Cast Members.

The first pin celebrates the 60th anniversary of Matterhorn, Monorail and Submarine Voyage! It is a jumbo pin with a size of 4.48″ x 5″. Limited edition of 200 and the retail price is $74.95.

The second release celebrates Tarzan 20th anniversary. The jumbo pin is LE 250 with a retail price of $69.95. Then there are four (4) book pins that feature Tarzan with Kala, Terk & Tantor, Jane and Sabor. Limited edition of 250 and the retail price is $22.95.