Limited Time Magic: On the Hunt for Disney Characters 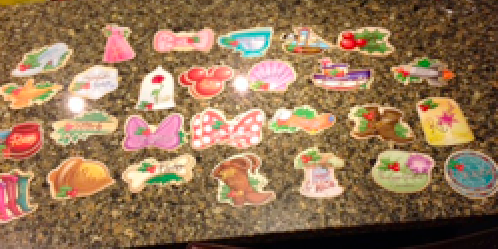 A few weeks ago, on a trip to the Magic Kingdom, my husband and I did something we have never done; we did not run to get in line for a ride when we arrived at rope drop.  Instead, we queued up to meet characters.  It was hard to fight the urge to run to Tomorrowland and secure our spot on Space Mountain, but we succeeded, and we had a great time! Now, we did not just randomly decide to meet and greet characters, we had a tangible goal, to collect Limited Time Magic Christmas cards from all of the characters in the Magic Kingdom.  As part of this particular Limited Time Magic promotion, there were 29 Christmas cards in total to collect.  The story goes that Duffy had organized these cards as part of a Secret Santa type of prize swap for all of his guests at WDW.  Of course, I cannot pass up free Disney paper ephemera, so we had our quarry, and we gave ourselves the entire day to achieve our goal.

Since we are not professionals at character Meet and Greets, we really had to come up of with a plan of attack for getting all of the cards.  Before we even started, we knew that two of the cards were impossible to get because the Fairy Godmother had already run out of cards, and Mary Poppins was not doing her usual meetings that morning.  So, we knew that we could only get 27 cards out of the possible 29.  With this in mind, we referred to both the Times Guide as well as the My Disney Experience App in order to make our plan.  In order to get all of the cards from the characters, we had to start at the flagpole in the front of Magic Kingdom.  Since many of those characters are only available until 1:00 or 2:00, we knew that we had to go through those lines first. I had no idea that the lines to meet the characters would be so long!  After waiting an eternity for Minnie Mouse and Duffy, we decided that we had to split up in order to get all of the characters before they retired from their locations. 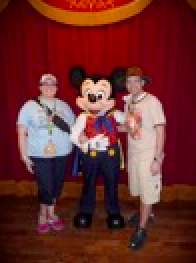 So, I headed to Tomorrowland, while my husband (who is wonderful to do this with me!), waited in line for Marie near the flagpole.  Some castmembers would just hand you the Christmas card and not make you wait in line for a photo, but some characters were running out of cards, so you had to wait in the line in order to get the card.  My husband had to wait in the extremely long line for Marie, while I was able to get Alice, the White Rabbit, Stitch, and Buzz Lightyear.  Luckily, I only had to wait for Buzz, which was an awesome meet and greet opportunity anyway!  Eventually, we made it around the Magic Kingdom on a whirlwind tour in order to meet all 27 of the characters that had cards.  We also met the Fairy Godmother even though she had already run out of cards; I mean she is the Fairy Godmother!

One of our favorite experiences of the day was Enchanted Tales with Belle.  I was picked to be Mrs. Potts during the story, and we just had a great time with all of the secret surprises that took place during that character encounter.  I highly recommend making time to have this experience, even if you don’t have children.  In addition to this attraction, we really enjoyed meeting Mickey Mouse.  He talked to us and interacted with us, and it is always just so cool to meet the Big Cheese! Finally, when we were walking through Fantasyland, the two stepsisters were strolling around just throwing the Christmas cards at people.  It was so funny, and they were just so entertaining.  I always love to see them out and about!

Overall, we had a great day meeting characters and stepping out of our comfort zone when it comes to park touring.  We were able to get Christmas cards from Minnie, Pluto, Duffy, Chip & Dale, Woody & Jessie, Alice & the White Rabbit, the Step Sisters & Lady Tremaine, Wendy & Peter Pan, Buzz Lightyear, Stitch, Belle, Cinderella, Aurora, Snow White, Rapunzel, Merida, Marie, Goofy, Donald, Daisy, Mickey, Ariel, Aladdin & Jasmine, Winnie the Pooh & Tigger, Tinkerbell & Periwinkle, Princess Tiana & Naveen, and Gaston.  It was a very long day, but we took it as a challenge!  So, if you have the opportunity, take the time to meet the characters and interact with them.  They are a huge part of the magic in the Magic Kingdom!