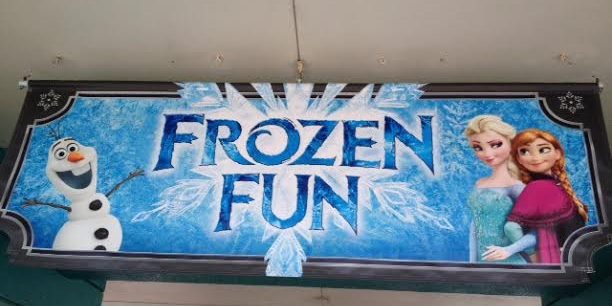 Since I am a cast member at Disney’s Hollywood Studios, I have had the opportunity to work at some of the events that are part of the Frozen Summer Fun.  In particular, I have been working at the Frozen Sing-a-long show that takes place at the Premier Theater.  This show is adorable and is a must-see for any fans of Anna and Elsa.  Both ladies appear on stage in order to re-tell the story of Elsa’s coronation day and all of the adventures that followed shortly thereafter.  Two historians of Arendelle narrate parts of the show and introduce the songs that are referred to as anthems of Arendelle.  If you are interested in seeing this show, there is a process for reserving your seat at the Premier Theater.  The show is presented throughout the day at 12:30, 1:30, 2:30, 3:30, 5:00, 6:00, and 7:00.  You should figure out what time works for you and then head to San Francisco Street, which is a part of the Streets of America.  There are queues and umbrellas set up on this street, and cast members distribute tickets for various shows throughout the day.  You must have a ticket (return time) in order to see the show at any point during the day.  The earlier shows fill up very quickly!  After you have received your ticket, then you need to return to the theater during the return time window that is listed. If you fail to return during the window, your seat will be given up to the folks who have decided to wait in the standby queue.  We have had many guests who misunderstand or who do not realize that they must return in the stated window.  Once the window closes, your seats are not guaranteed anymore.  Also, once the show starts, guests are not admitted into the theater.  I know it seems like a lot of trouble to go through in order to see this show, but if your little ones love Frozen, this show will thrill them.  There are all sorts of little surprises during the show that really make Arendelle’s magic come alive! Now, in addition to the sing-along, there are other Frozen events as well.  You can visit Oaken’s Frozen Funland as well as the Trading Post in order to ice skate, play in snow, and purchase all of the Frozen merchandise you could ever want.  These two offerings can be found in Soundstage One, the former home of Darth’s Mall during Star Wars weekends (right next to Toy Story Midway Mania).  In order to ice skate, you must be accompanied by someone over 18 if you are a minor, and you must rent ice skates as well as a helmet.  The rental fee is $10 for thirty minutes of skating.  Also, there is a professional skating demonstration every half an hour throughout the day.  The snow play area is almost like a sandbox, but it is filled with snow!  There is a queue for this experience, but there is no extra charge.  For a limited time window, you can play in the snow with all manner of sand buckets and toys until it is time for the next group to enjoy themselves.  Overall, this is all very well done, and it is a welcome relief from the unrelenting heat of the Florida summer. As evening time approaches, more Frozen events take shape at the main stage in front of the Sorcerer’s hat. There is a dance party, and then at 9:45, there is a beautiful fireworks display that includes appearances from some of our favorite residents of Arendelle. Overall, Frozen Summer Fun is a welcome respite from the heat of the summer, and it also allows more guests to be able to spend time with Anna and Elsa. Of course, a Disney event wouldn’t be complete without pins, and there are a few new pins as well as lanyards to celebrate Frozen. If you have the chance, definitely check out these new offerings at DHS. As of right now, Frozen Summer Fun is only supposed to last until September 1st, but I have a feeling, it is going to be hard for WDW as well as guests to let this one go! All Disney Grail Pin Giveaways on Whatnot!
February 5, 2023