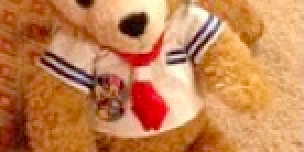 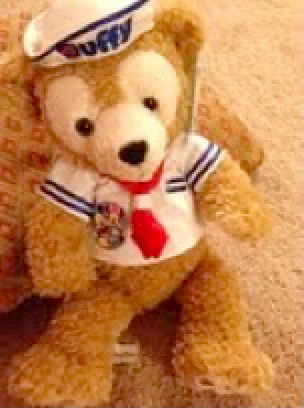 Duffy the Disney Bear is a source of much debate among Disney Fangirls and boys on the Internet because some people do not consider Duffy to be a real Disney character.  For me, Duffy has been a wonderful addition to the pantheon of Disney characters that inhabit all of the Disney Parks.  Although Duffy the bear has been a relatively new character in WDW, he has been around for quite a while.  Several years ago, Duffy was introduced as just the Disney bear, and he did not have a name.  He was not very successful, and alas, he went by the wayside.

This Disney Bear did not perish; he received a new life in Japan as Duffy the Disney bear.  He has been wildly popular in Tokyo Disney, and as a result, there is so much Duffy merchandise in Japan.  There is also a Duffy stage show, where Duffy has a bear friend named Shellie Mae as well as a bird friend named Tippy Blue.  Again, there is a huge amount of merchandise for these characters too.  The Japanese park guests all carry around Duffy bears as well as Duffy bags, pin straps, and even wear Duffy jackets. If you are a collector of Disney merchandise, then Duffy opens up a whole new avenue of collectables.  You can purchase so many different outfits for Duffy or you could collect the pre-dressed smaller versions of Duffy.  Recently, Disney has released a yellow rain poncho for Duffy that matches the ponchos that Disney used to sell to guests before the clear ponchos took their place.   Of course, I had to buy that poncho! The Duffy merchandise has even infiltrated the world of pins.  There are several sets of pins that feature Duffy wearing various hats; each hat belongs to a different Disney character.  I have twelve of these pins, and I am always on the look out for more of them.  Epcot also features Duffy on a set of pins that represent the different countries that make up the World Showcase.  My favorite is Duffy dressed in a poncho and a sombrero. 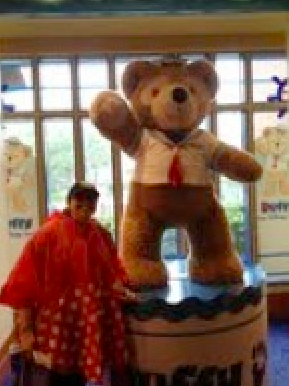 I love Duffy, and if I could take a trip to Japan to buy all of this merchandise, I would.  However, I do have access to the Internet and eBay, so I can solace myself with my purchases from Japan via eBay.  My most recent addition has been a Duffy phone case.  I also have a 17 inch stuffed Duffy bear, a keychain Duffy, a magnet Duffy, a Halloween Duffy, a pillow pet Duffy, a Duffy jacket, many Duffy pins, and a Shellie May coin purse/ticket holder.  My Duffy is dressed in his signature sailor suit, but he also has his poncho just in case of a rainy day. 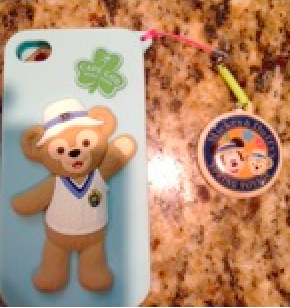 In Epcot, you can even go and meet Duffy and visit the Duffy store.  Duffy even has a back-story, in which Minnie made a stuffed bear for Mickey so that he would not be lonely on his many journeys.  This bear is Duffy.  All in all, I enjoy the Disney bear and all of the extremely cute merchandise that is available for this character.  One day, I will travel to Tokyo, and I will buy even more!