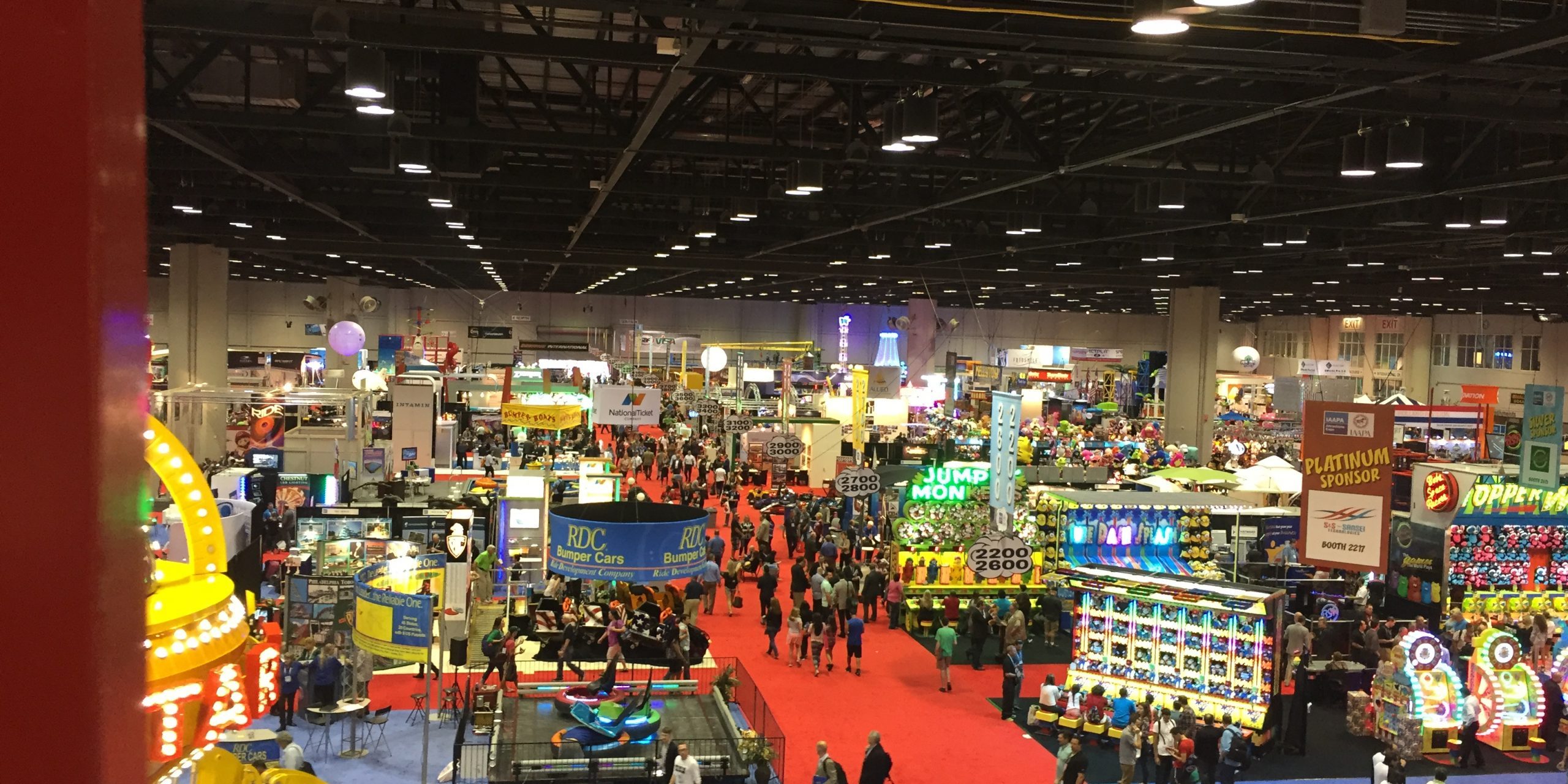 Overwhelmed is the best word I can think of to describe the IAAPA Expo that just occurred in Orlando.  Disney Pins Blog recently experienced this Expo for the first time, and we had a blast.  For those of you who may not be aware, IAAPA stands for the International Association of Amusement Parks and Attractions.  This association includes multiple ride manufacturers and really everything that could be considered part of an amusement or theme park. 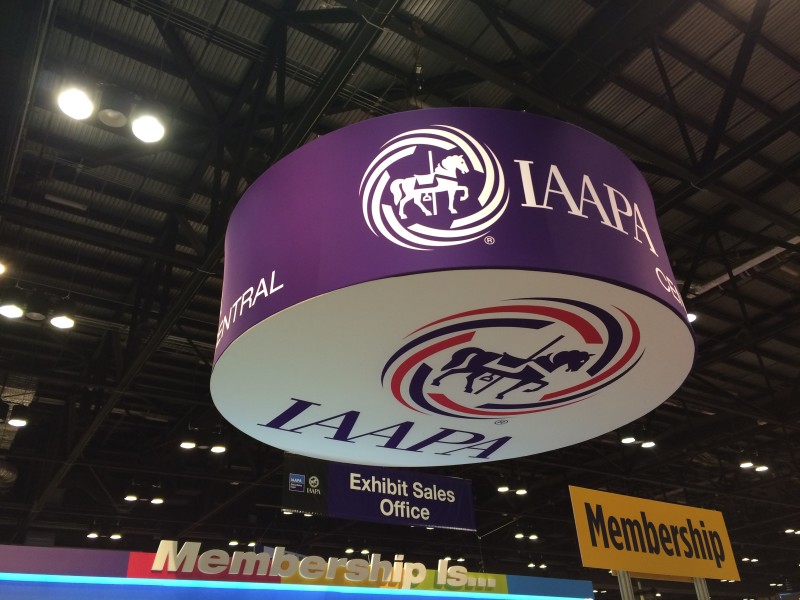 Our journey at the Expo began by heading to the Orange County Convention Center in Orlando.  This convention center is enormous; the entire show floor was devoted to everything theme park related.  Not only was the inside of the convention center utilized for the Expo, but large portions of outdoor areas were also used to house any attractions that were too large to be inside!! This should give you an idea of the scope and scale of this event. 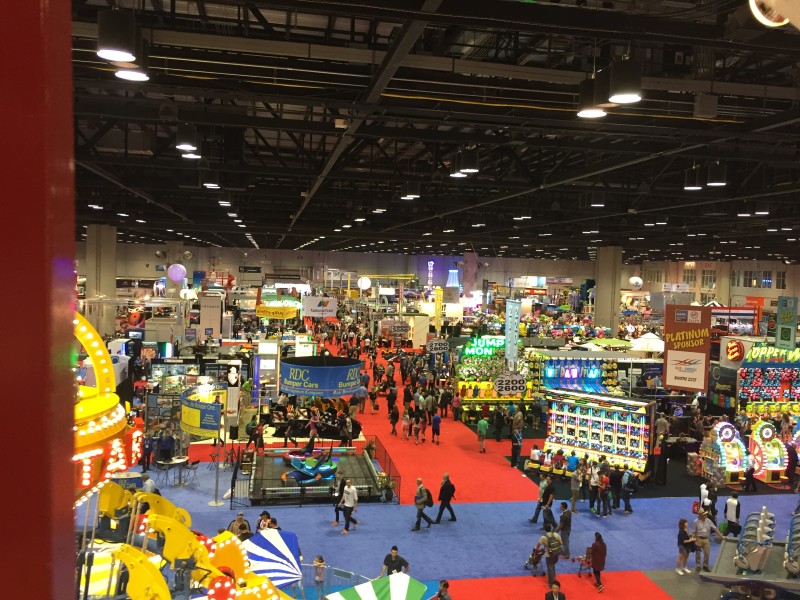 After we entered the show floor, my jaw just dropped.  There were full sized attractions inside of the convention center.  There were people riding these attractions as well as taking turns on ropes courses as well as people playing every arcade game that you could ever imagine.  These attractions, guests, and games were from all over the world, so this was definitely a multi-cultural experience! 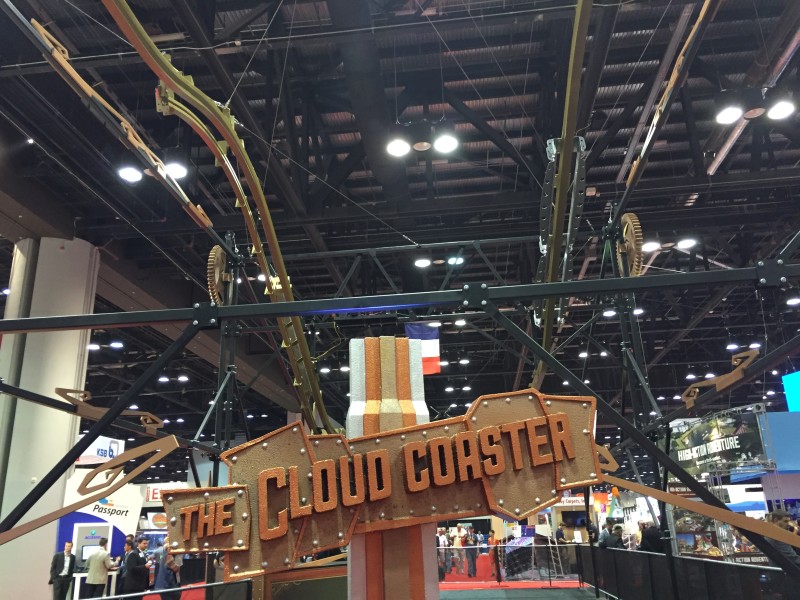 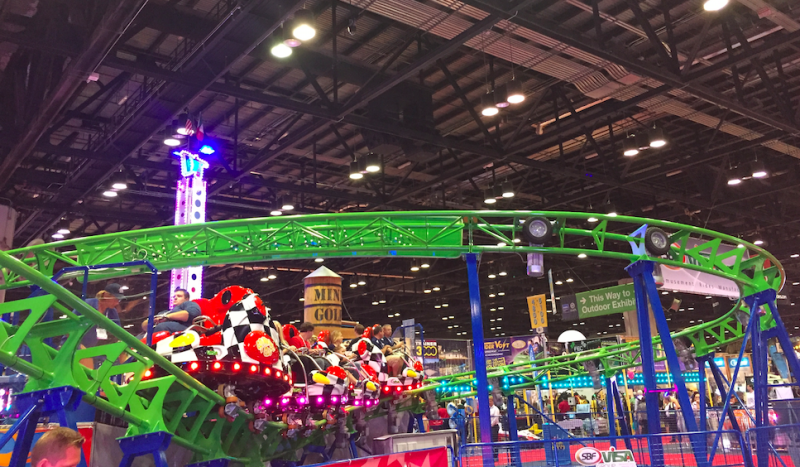 In addition to the attractions, there were also food vendors and entertainment vendors who were hoping to sell their wares to potential buyers from the theme park industry.  We brushed shoulders with people who represented some of the biggest names in themed entertainment.  I could go on forever listing everything that we saw, but there were a few items that really stood out. 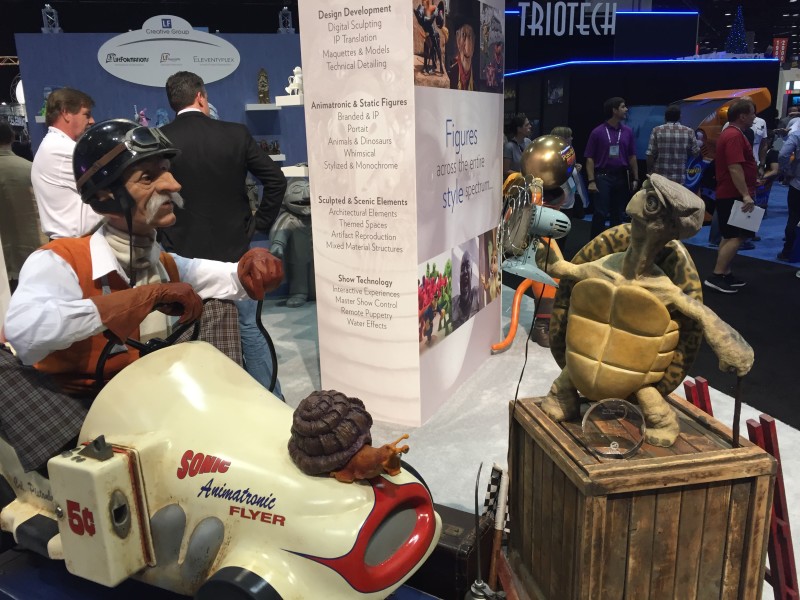 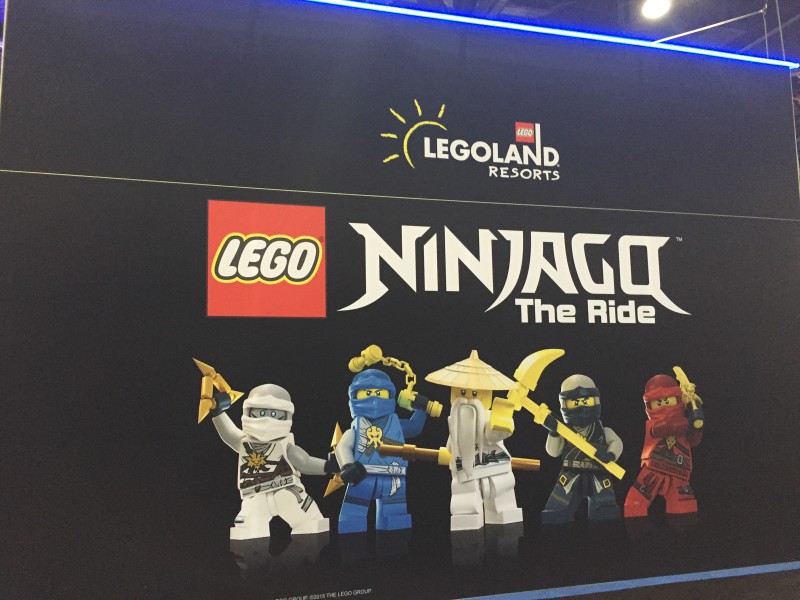 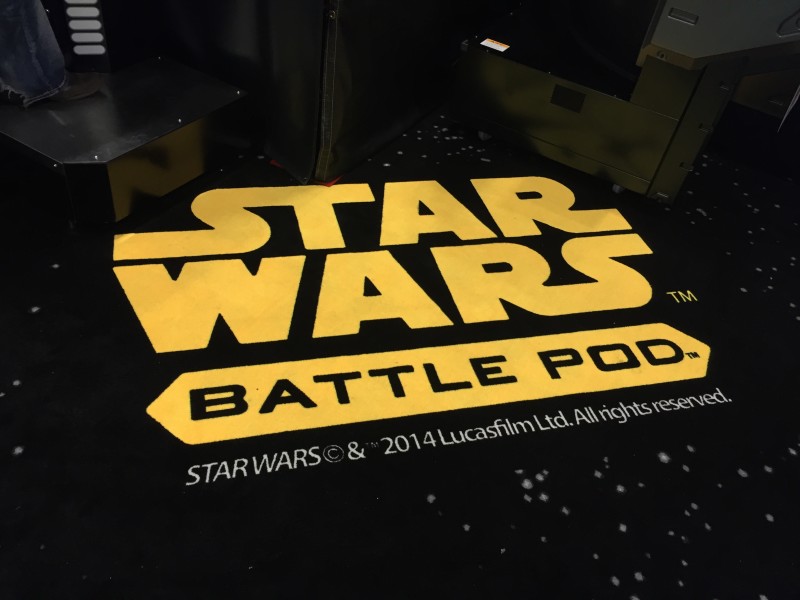 If you are familiar with amusement park attractions, then you have probably heard of the Italian ride manufacturer, Zamperla.  This company has been in the industry for almost 50 years, and they brought two full sized attractions to the Expo. One attraction was a spinner where each seat was shaped like a hang glider.  You could control your glider by pushing up or down on the lever that was attached.  The movement was very smooth, and it was very exciting to fly high above the show floor and take in everything that we could see.  There was also a smaller ride for younger guests, which included vehicles shaped like hot air balloons.  Again, you could just relax and take in the entire show floor as you rotated on this ferris wheel type attraction. 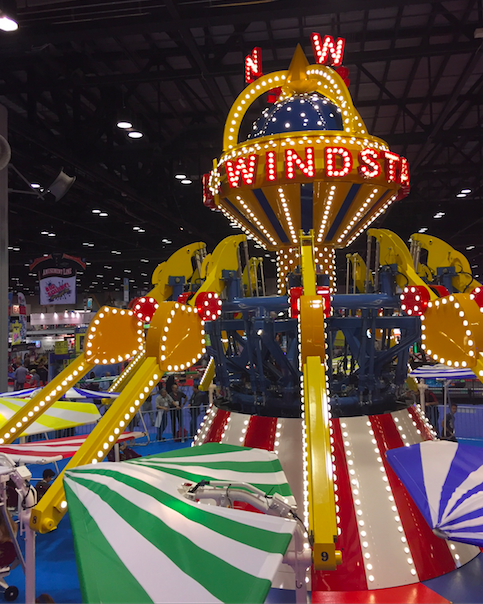 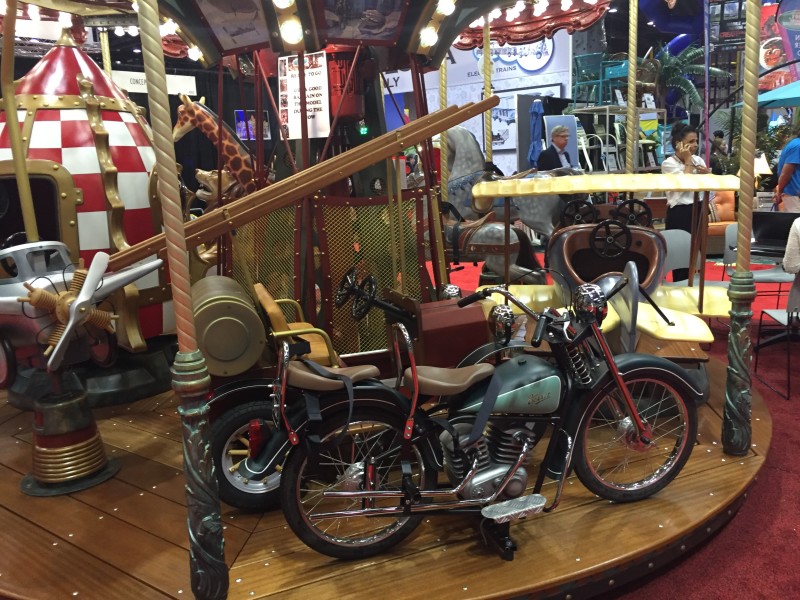 While there were many attraction manufacturers present at the Expo, we also noticed a few interesting booths that were a little less flashy.  For example, one booth sponsored by the Electric Time Company, Inc. caught my eye.  This particular company makes many different types of clocks.  After chatting with the presenters at the booth, I came to find out that the fancy clocks on the Main Street Train Station at Disneyland, the clock on Main Street in the Magic Kingdom as well as many other clocks on Disney property were built by the Electric Time Company! I thought that this was so neat because I always take a photo of the Main Street clock at the Magic Kingdom.  The folks working the booth were very nice, and we chatted for a while. 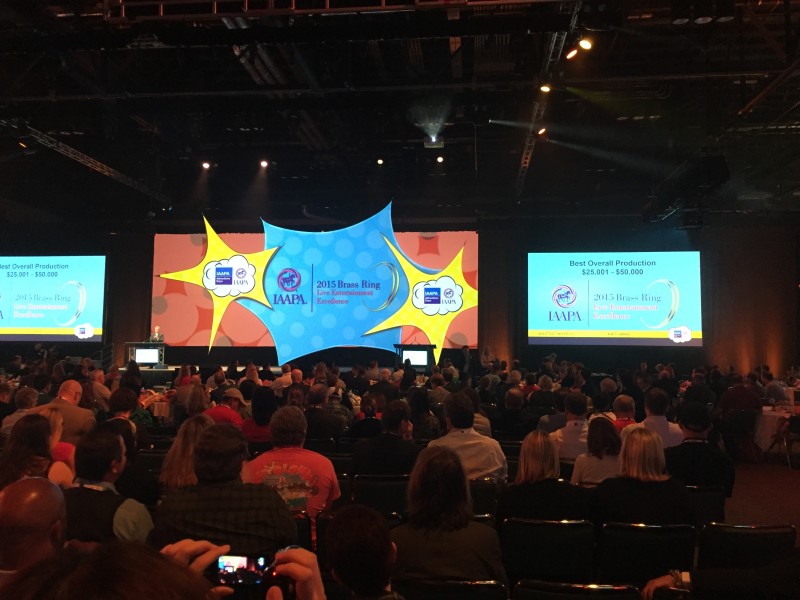 Another really interesting booth showcased samples from the National Fiber Technology, LLC.  You might think that this doesn’t sound very exciting, but think about some of our hairier inhabitants of Walt Disney World.  How about all of the animals in Splash Mountain or Chewbacca or Simba?  All of these folks had a little help from their friends at the National Fiber Technology Group.  Again, the presenters at this booth were full of great stories and wonderful information. 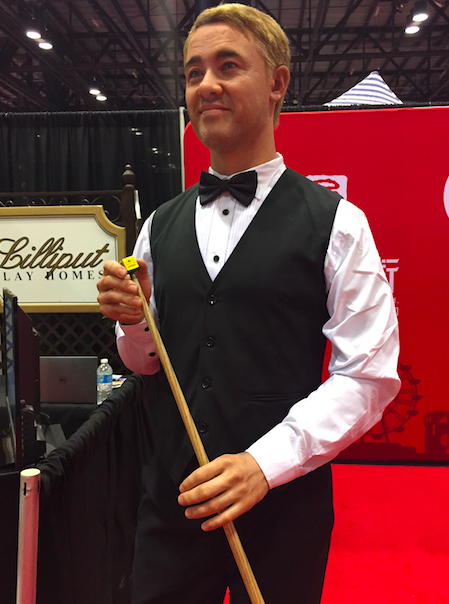 So many attractions at WDW play host to many audio animatronics, and we definitely saw some beautiful works of art in this regard at the Expo.  There were some figures who seemed so lifelike, I thought they were going to stand up and hold  a conversation with me.  One of the smaller sellers of animatronics was Charles Lanusse, who creates Minimation Animatronics.  He handcrafts small animatronics to suit whatever need you might have.  We chatted for a while, and we came to find out that we are both originally from Louisiana.  Charles has been in the animatronics business since the early 80’s, and you could definitely see his attention to detail in all of his figures.  It was amazing to meet people who actually create magic! 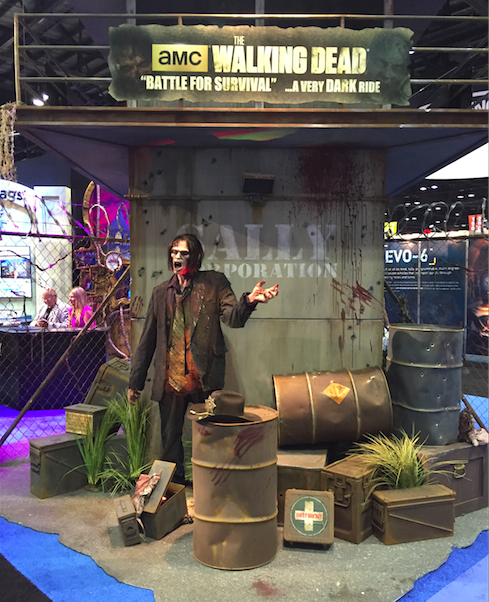 Speaking of animatronics, we also got a preview of the new animatronics from the Sally Corporations Walking Dead Dark Ride.  The undead figure was so lifelike and horrifying; I am glad he wasn’t actually real!  I could really go on and on forever about everything that we saw, but that’s enough for this article.  I cannot wait to go to another Expo like this and become even more immersed in the world of theme parks. 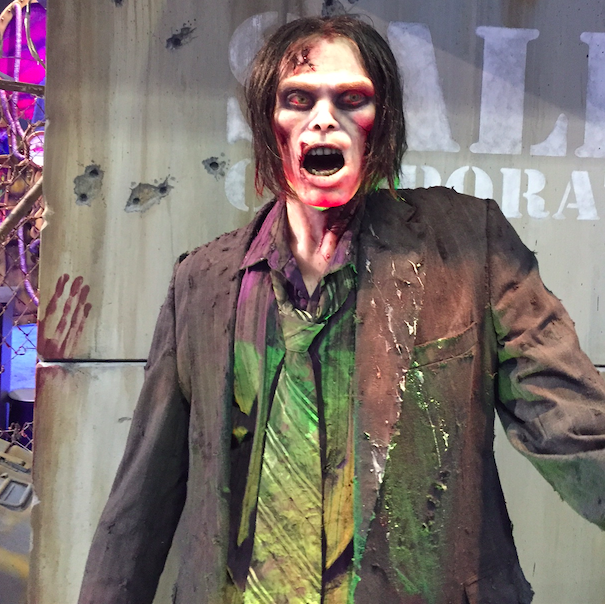