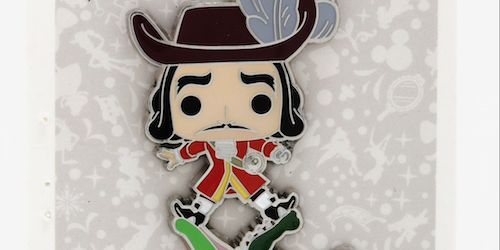 Here is a look the new Funko Pop! Disney Captain Hook enamel pin at BoxLunch! The retail price is $9.90. Released in February 2019 and is part of the Funko Pop BoxLunch Collection.

That cursed beast liked the taste of me so well, he’s followed me ever since, licking his chops for the rest of me. – Captain Hook
What’s that sound? Sounds like Tick-Tock is near! This enamel pin from Funko Pop! presents a very scared Captain Hook with Tick-Tock the Crocodile. Available at select stores and online.